Listen to the Audio Tour

Art and history intertwine through a collection of exquisite works by Gilroy Roberts, the Ninth Chief Engraver of the U.S. Mint from 1948 to 1964. Mr. Roberts is best known for his design of the obverse (heads) side of the Kennedy half dollar, which was commissioned after the President’s death on November 22, 1963. The Gilroy Roberts: Mastering a Craft exhibit showcases many examples of his artistic talent, exceptional vision and passion for his work.

Community College of Philadelphia’s Mint Building retained its name from its previous function—the third Philadelphia Mint, in operation from 1901 to 1969. It was in the Mint Building that Gilroy Roberts worked for almost two decades, appointed by the President of the United States, designing and engraving coins, and presidential and congressional medals. The College acquired the building in 1971 and started offering classes at the location in 1973.

“There’s just as much romance in art as people think there is. I don’t think there’s anything on earth that can match the satisfaction of using your skills and imagination to produce something that you feel is right.”
—Gilroy Roberts

The treasures in this 1,000 square foot exhibit span Roberts’ career, walking you through the life of a highly accomplished artist that documented and created history.

You will explore Roberts’ creative processes and methods through displays of plaster molds of coins, medallions and plaques, along with the resulting finished artwork. Special attention is paid to the evolution of the Kennedy half dollar, of which 4.1 billion coins have been struck since 1964. Included in the exhibit is a dioramic representation of his home studio, featuring his tools, some of which were handmade, complete with the magazines he kept as inspiration, and an engine he used for engine-turned engraving.

Also on display are stamps from the Famous Americans Commemorative Postage Series, produced in 1940 while Roberts worked for the Bureau of Engraving and Printing; and The Great American Eagle sculpture he designed while working at The Franklin Mint, a position he took after resigning as chief engraver. Additional works include animal sculptures and series featuring U.S. Presidential coins, bird medallions and the signs of the zodiac.

Three multimedia components in the exhibition include: 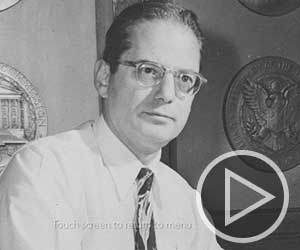 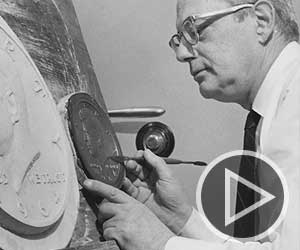 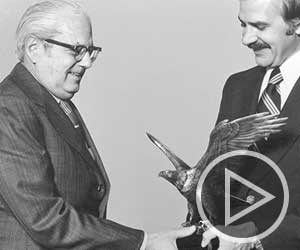 Works from the complete collection will be rotated into the exhibition. The Gilroy Roberts Gallery opened on Nov. 22, 2013, in observance of the 50th anniversary of the death of President John F. Kennedy.

Benefitting Students and the Public

The Gilroy Roberts: Mastering a Craft exhibit is made possible by a generous gift from the Gilroy and Lillian P. Roberts Charitable Foundation. The donation also provides for the establishment of a substantial scholarship fund for students pursuing an arts program at the College.

This exhibit lends itself to educating visitors about U.S. history, different artistic media and the life of Gilroy Roberts.

The Gilroy Roberts: Mastering a Craft exhibit encircles one side of the elegant Mint Rotunda, an ornamental space that originally housed an extraordinary collection of coins and medals from the United States, ancient civilizations and countries around the world, when the third U.S. Mint was in operation. Long ago called the Cabinet, the room also held mineralogical specimens relating to the metals and processes involved in minting.

Free and open to the public
Monday through Thursday, 8 a.m. to 8 p.m.

For more information about the Gilroy Roberts: Mastering a Craft exhibit, please call 215.751.8042.