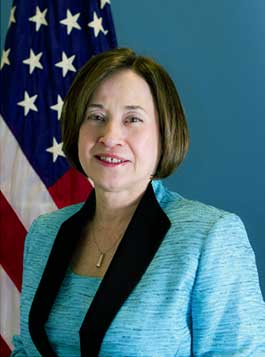 The event will feature a keynote adress by Sara Manzano-Diaz, appointed by President Barack Obama to serve as Regional  Administrator for the U.S. General Services Administration’s (GSA) Mid-Atlantic Region, effective May 7, 2012. In March 2013, she assumed the added responsibility of serving as Acting Regional Administrator for GSA’s Southeast Sunbelt Region. Ms. Manzano-Díaz oversees the federal government's real estate portfolio, procurement of goods and services in fourteen states across two regions, as well as in Africa, Europe and the Middle East.  She leads over 2,000 employees, is responsible for a federal real estate inventory of over 2,600 owned and leased buildings, and oversees a fleet of 60,000 vehicles. Prior to joining GSA, Ms. Manzano-Díaz was nominated by President Obama and unanimously confirmed by the U.S. Senate in 2010 as the 16th Director of the Women’s Bureau at the U.S. Department of Labor. Working with the White House, Congress, federal agencies and stakeholders, she focused on domestic and international policies affecting women in the workforce.

Ms. Manzano-Díaz's varied experiences also include serving as an Assistant Attorney General in New York where she conducted investigations and prosecuted allegations of consumer fraud, as well as other Judicial positions. Additionally, she has served as co-chair of The Forum of Executive Women’s Mentoring Committee, which mentors young professional women as they begin their careers. Ms. Manzano-Diaz earned a Bachelor of Science degree in Public Relations and Communications from Boston University and a Juris Doctor degree from Rutgers University School of Law.

To reserve your seat, call the Women’s Outreach & Adocacy Center at 215.751.8808 or email womencenter@ccp.edu.