College's Response to the Coronavirus (COVID-19)

Find Your Academic and Career Path

Whether your goal is to earn an associate’s degree, transfer to a four-year college or start a new career in an in-demand field, Community College of Philadelphia has a program to help you down the path of achievement. Explore our full array of academic and proficiency certificate programs by searching the program name or Academic Pathway, or by scrolling down and selecting the program of your choice.

Philadelphia, PA. (Nov. 8, 2013)–Community College of Philadelphia will host a day of remembrance on Nov. 22, marking the 50th anniversary of the death of John Fitzgerald Kennedy, America’s 35th president.

For the first time, the College will open to the public a coin art exhibit showcasing the life and works of Gilroy Roberts, the Ninth Chief  Engraver of the U.S. Mint whose signature medallic portrait of President John F. Kennedy was used for the obverse (face side) of the Kennedy half dollar. The 1,000-square-foot exhibit called “Gilroy Roberts: Mastering the Craft”, is housed in the regal corridors of the Mint Building’s Rotunda, an elegant space graced with Italian marble and gold mosaic. The Mint Building formerly served as the home of the nation’s third U.S. Mint in Philadelphia.

A brief ceremony honoring Kennedy will begin at noon, Friday, Nov. 22, in the Rotunda, which is on Spring Garden Street between 16th and 17th streets.  Students, faculty and staff will mark the 50th anniversary of Kennedy’s assassination with brief remarks, reflection and a solemn flag ceremony featuring an honor guard. The event will conclude with a moment of silence at 12:30 p.m., as students, faculty and guests are invited to reflect upon his life and death.
Every visitor to the College’s gallery on Nov. 22 will receive a card inscribed with Kennedy’s 1961 famous inaugural quote: "Ask not what your country can do for you — ask what you can do for your country." Guests will be invited to write down how they intend to respond in 2013 to Kennedy’s call to action. The remembrance pledges will be placed on a wall and later added to the College’s historic archives. The College will celebrate its 50th anniversary next year.

The exhibit was made possible by the Gilroy and Lillian P. Roberts Foundation’s $1.02 million gift to the Community College of Philadelphia in 2012. The donation sought to preserve the historic Philadelphia collection and the legacy of an engraver whose likeness of John F. Kennedy is recognized around the world.

Since its debut in 1964, more than 4.1 billion Kennedy half dollars have been struck by the artisans of the United States Mint. According to the U.S. Mint, the only significant change to the original design came as a result of the Nation's Bicentennial celebration in 1976 when an image of Philadelphia's Independence Hall temporarily replaced the Seal of the President on the coin's reverse, and a dual date (1776-1976) was placed under the portrait of President Kennedy on the obverse.

The Gilroy and Lillian P. Roberts Charitable Foundation moved the pieces in the exhibit to the College in 2012. The interactive exhibit includes sculpturing tools, including homemade items,  in addition to drawings, medals, and coins. It showcases a diorama replication of Roberts’ artist studio once located at his Newtown Square, Pa. home. And it features three multimedia components:

Victoria Prizzia, Founder/President at Habitheque Inc., served as the exhibit planner, along with Metcalf Architecture & Design. Two other Philadelphia firms, Greenhouse Media and Blair Brothers Music, also participated in its development. The College’s architecture students contributed major design elements, including the UV window overlay imprinted with the Kennedy half dollar that covers circular windows and protects the artifacts.

Upon his death at age 86, the items in Roberts’ basement studio were packed up and shipped to the American Numismatics Association, where they first were put on exhibition in Boulder, Colo. As the Association expanded, however, it no longer had space to house the collection, which was brought back to Philadelphia and ultimately ended up at the very site Gilroy Roberts carved his own place in history: The Mint Building.

Though Roberts primarily is known as an engraver, family and friends say he actually made most of his fortune after Joseph Segel, the founder of The Franklin Mint, recruited him to work in private industry. The Gilroy and Lillian P. Roberts Charitable Foundation disburses more than $400,000 yearly.

You don’t need to take a break from earning credits over winter break. Take an online class and accelerate your path to a degree. Winter term classes are held December 16, 2019 through January 10, 2020.

Yes, I want to enroll in Winter Term classes >> 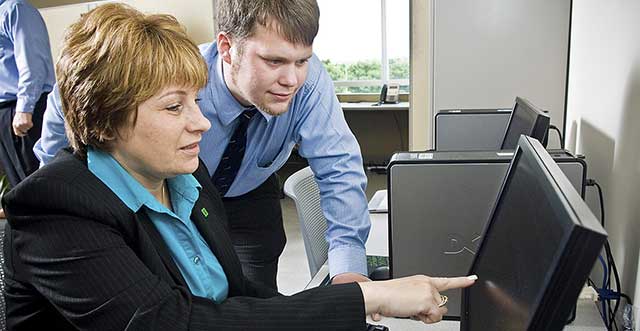 Explore the careers, salaries and job demand linked to your program of interest.

Complete our online admission application to start on your path to success.

People of the College

SHAWANA
I went to CCP for a while, then I stopped. I was laid off from my job last September. One of my goals was to just focus on school. So when I was laid off, I took the opportunity to come back. Because of CCP’s policies, a lot of my classes transferred and I was able to come back and only take about three to four classes. My plan after graduation is to begin at La Salle while working part time. My education is so important. I let my work get in the way previously; now I’m taking my education seriously!
Read Shawana's Story
KAVON
I’m currently at Temple University studying Theater and Business Administration. In my high school, I was encouraged to think outside of the box and think about time management. My counselor from my high school recommended we go to CCP first because the College adds a lot of value and character for students. I ended up enrolling in CCP with a full ride!
Read Kavon's Story
PALUMA
I come from Puerto Rico, so the easiest way to transfer my credits and not have a big student loan was to come here to CCP. I was looking around at other colleges and CCP seemed like a really good fit for what I was looking for—and I heard good things. I’m glad I did.
Read Paluma's Story
SYMEON
My major here at the College is Business Administration. All of the ‘fun’ activities I thought were just for ‘fun’ as a kid were actually business-related so I decided that would be the best career to get into.
Read Symeon's Story