Due to City of Philadelphia mandates, all students, faculty and staff must be fully vaccinated. To register for in-person or hybrid classes, students need to be fully vaccinated or have an approved exemption. Students who are not vaccinated or do not have an approved exemption are able to register for fully online courses. Please see our College COVID-19 Updates for more information and visit our Virtual Student Resource Center for support.

For the Second Time Around, Alum Makes the Right Connection 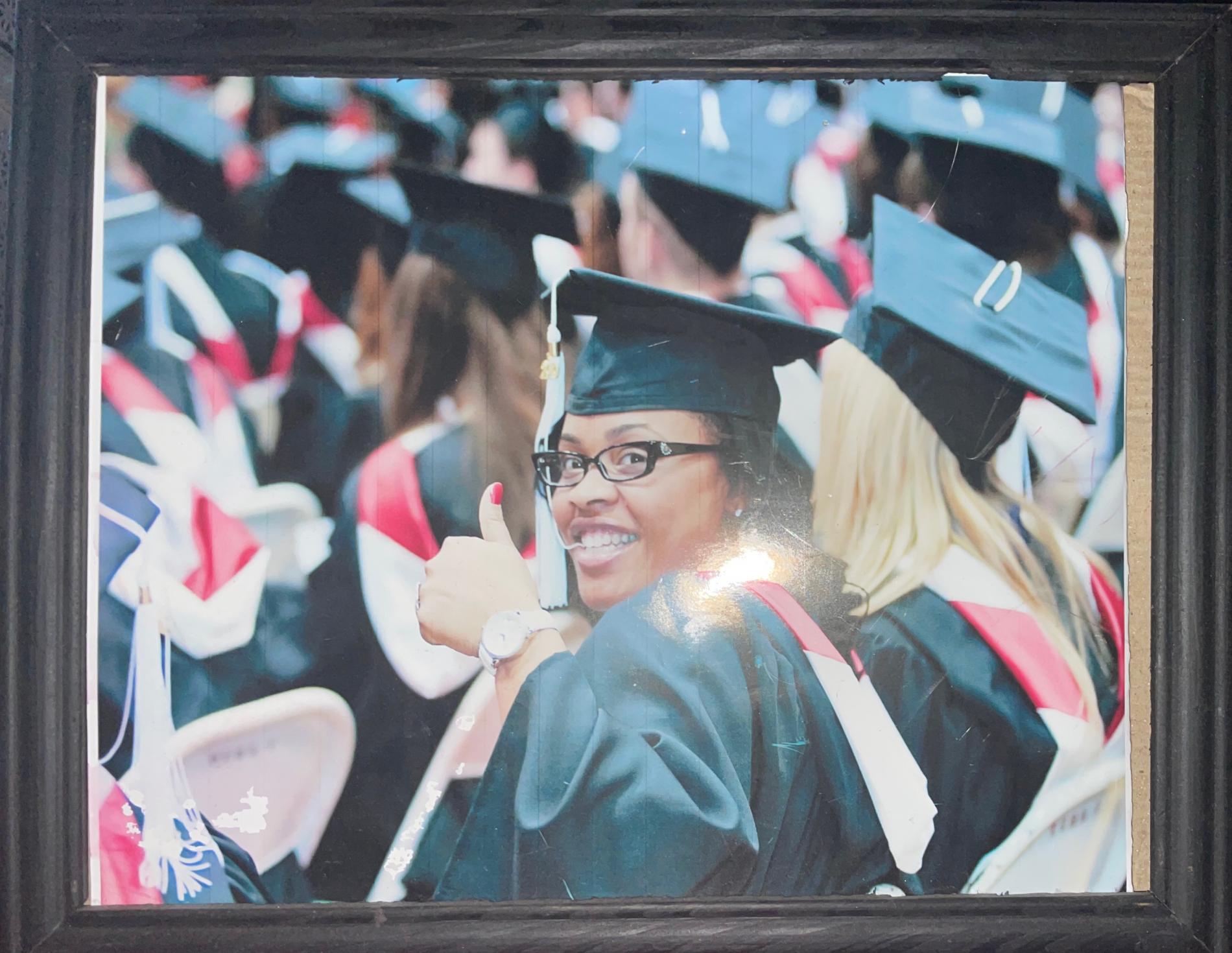 Connecting people to resources is not only a passion for Tia Watson; it’s what she does for a living. Tia serves as the Southeastern Pennsylvania Regional Director for United States Sen. Bob Casey and has been assisting the community to find and utilize helpful resources through strategic planning and advocacy efforts.

“I love my job, and I love what I do,” Tia said. “It brings me so much joy knowing I’m in a position to help people who look like me and live in the neighborhoods like where I grew up.”

But to get where she is now, the connection was Community College of Philadelphia.

Tia was born and raised in Philadelphia, and grew up in Frankford, a low-income section of the city. Between her neighborhood and family, Tia didn’t have many people around her that she could seek out advice from about college because none of her immediate family members attended college. But Tia’s mother always encouraged her to go to school and “get a good job.” With limited resources and direction, it made it harder, and Tia had to figure it out on her own.

So, after graduating from Frankford High School, Tia went on to attend Penn State Schuylkill, but admits she did not take it as seriously as her mother had hoped. Tia attended the school for one year before ending the semester on academic probation. She then returned home and enrolled at Community College of Philadelphia with the intention of taking a few classes to get her GPA up.

“It was a big adjustment, and I just wasn’t focused,” Tia said of her first years in college. “I wasn’t serious about being there, and I didn’t take advantage of the experience, especially the opportunity to learn from and engage with the professors. I was just there, almost as if it was just something to do.”

Tia never returned to Penn State, and instead took some time off. She took an opportunity to move to California, where she lived for a few years but later returned home as a soon-to-be mom. Upon returning, Tia continued working in former U.S. Congressman Chaka Fattah’s office to support herself, and, with his strong advisement and encouragement, Tia enrolled at the College again. But this time it was different.

“I was pregnant and was more focused on finding direction for my life because I now needed to provide for my son,” she said. “It was clearer to me how important education and obtaining a degree was, especially knowing that I’ll be providing for my child. Graduating from college was the first step for me.”

Because she was pregnant, Tia took full advantage of the counseling opportunities the College offered. She connected with her counselor regularly to discuss her possible careers with a Communications degree.

“She gave me so many options that I had no idea existed, and she explained how my skills were transferable,” Tia said. She recalled the dedication her counselor showed, taking into account Tia’s existing government work and course roster to help her determine the various ways she could stay involved.

“My favorite classes at [the College] were Public Speaking and Interpersonal Communications,” Tia said. “What I learned in those classes was extremely impactful and have stayed with me until today, and that’s why I value my CCP experience.”

Tia graduated from the College in 2008 with an associate degree in Communications and then went on to Temple University to complete her studies, graduating with a degree in Strategic 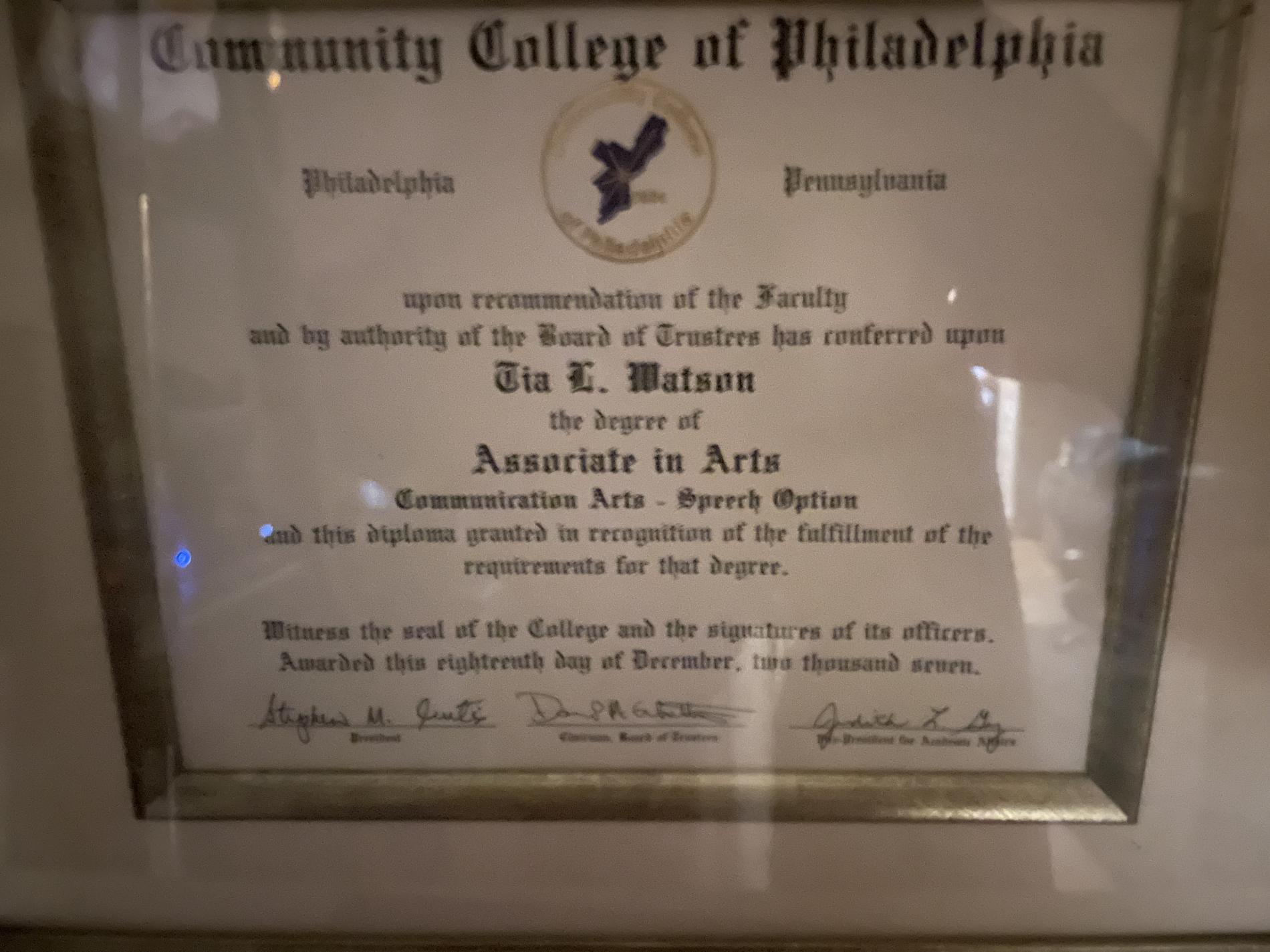 Leadership in 2010. She sustained her position in Congressman Fattah’s office handling constituent services. Although she had been doing that for some time, it didn’t fulfill her desire to help residents locally. Upon her return to Philadelphia, her excitement to help the City and the community was what she knew she wanted to do with her career.

“I was home again,” she said excitedly. “I knew Philly, the issues, the people. I had a good understanding of what people needed. So, I needed to be closer to the community.”

An opportunity soon arose for Tia to work on Councilwoman Cindy Bass’ campaign as she ran for re-election, and she then joined the team as chief of staff. This gave her the chance to be on the ground listening to the residents and working with them to determine ways to improve the quality of life for all Philadelphians. Ultimately, Tia moved on from her position, taking on new opportunities within city government and nonprofits as her career progressed. Working with an array of organizations, she began to notice a pattern. Tia was becoming a “connector” as many of her roles connected people to resources—government or otherwise—that could help them. She takes great pride in being able to elevate messages and concerns that otherwise would not have been heard.

In an attempt to assist a friend looking for a new position, she stumbled upon a posting for Philadelphia Regional Representative in Sen. Casey’s office, which she secured, and started on a new journey for her career. Tia was recently promoted in May to her current position as director, where she is a liaison for Sen. Casey and the southeastern PA region, and spends much of her time strategically building relationships and identifying meaningful ways for Sen. Casey to engage with constituents, especially regarding issues related to Black and brown youth and grassroots organizations.

“That’s what I enjoy most about my job,” Tia said. “Being a Philly native and seeing so much of what I’ve seen growing up, it’s amazing being able to go back into the communities, some of which are intrinsically a part of my story, and now being able to expose and connect them to resources and opportunities they didn’t think they could experience.”

As she reflects on the impact of her time at the College, Tia has this to say:

“Community College of Philadelphia was the foundation for my journey. It was there that I was exposed to the vast array of possibilities; it was the amazing leadership at the College that forced me to tap into my potential. It was CCP that further opened my eyes to the world of public service and the many ways in which I could make a difference.”