Where Will We Go?

Philadelphia is a city on the rise, seeking new ways to advance small businesses, local talent, and families seeking economic and social prosperity.

The College’s rich history of educating generations of city leaders continues. A new generation of recent high school graduates have benefitted from the rigorous academic offerings and the preparation needed to succeed in life. Students have transferred to the University of Pennsylvania, Temple, Bucknell, Bryn Mawr, Drexel—among many more—and most of the state’s public universities and colleges. Equally important, many students have gained employment with some of the city’s finest companies.

Collaborative efforts with the School District of Philadelphia and Community College of Philadelphia have resulted in more than 1,000 high school students participating in any one of our early high school or dual enrollment programs. Beginning this fall, the connection deepens and the pipeline grows as students at Parkway Center City Middle College will be able to enroll in high school, and ultimately graduate with an associate’s degree from the College and a high school diploma. Research funded by the Bill and Melinda Gates Foundation found that early college students were significantly more likely to graduate from high school and more likely to enroll in College. This pipeline to college completion is an important step in creating a culture of prosperity citywide.

Leaders of the School District and the College are working to prepare students to succeed early at college-level work in an effort to align the curricula and to ensure a smooth transition to higher education. 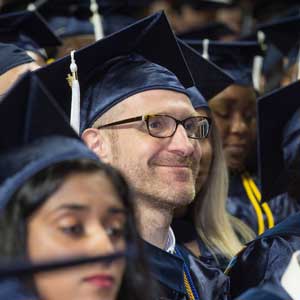 Given the unique mission to meet students where they are, our highly acclaimed Honors program prepares the city’s top scholars for transfer, while other initiatives guide those who need one-on-one mentoring and academic support to reach their career destinations. We are equally proud of these accomplishments and of the students in programs such as KEYS (Keystone Education Yields Success), who are on public assistance and often face personal challenges. More than 10,000 Philadelphians have been served through this program over the last 11 years. Of the 19 KEYS participants who graduated on May 6, four earned associate’s degrees in Nursing, where the entry-level salary is more than $50,000.

Individuals from all walks and stages of life are attracted to our campus and Regional Centers: In the Class of 2017, the oldest graduate was 72 years old, and the youngest graduate was 19 years old. In all, we had 1,950 graduates. The graduates included 27 international students, representing 16 countries; 47 veterans; eight employees of the College; 31 candidates for graduation from the Center for Male Engagement; and the first seven graduates from the 50th Anniversary Scholars Program.

Lindsay Jackson, an Education – Early Childhood (Birth to 4th Grade) major, and mother of seven, was the student speaker, and she graduated with Honors. 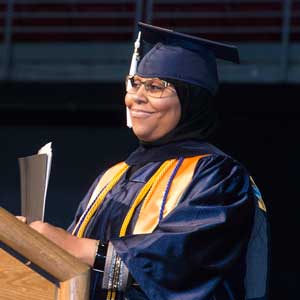 “From the recent graduate to the recently laid off worker trying to find their way to a new career path; to the grandmother who decides it’s finally time for her to focus on her dreams of becoming a business owner; to the divorced, single mother of seven children who wants to show them an example of strength and perseverance, the possibilities are endless,” said Jackson, who earned a Dean’s Award and several scholarships, including one for $19,000 that will enable her to pursue a bachelor’s degree. 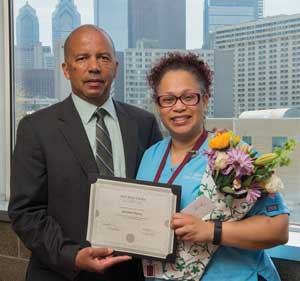 Jennifer Myers, a graduate in the Diagnostic Medical Imaging program, was among 55 winners of the 2017 Jack Kent Cooke Undergraduate Scholarship, selected from 3,000 applicants nationwide. She is the fourth Jack Kent Cooke recipient from the College in the past seven years. The largest private scholarship in the nation, this award provides high-achieving, service-oriented community college students up to $40,000 per year to complete their bachelor’s degrees.

Myers, who lives in Fairmount, has been accepted to Thomas Jefferson University and will complete her bachelor’s in General Sonography. Upon completion of her bachelor’s degree, Myers is looking to further her education and become a physician assistant. “My college experience has been a second chance. When I was young, I didn’t work to my full potential. When entering college, I needed to take remedial math class before I could go even further. I took on that challenge and even exceeded my expectations by taking statistics and calculus. Tenacity was the key to my success, and my hard work has really paid off,” Myers said.